Standard employment refers to a full-time, permanent work arrangement between an employer and employee.

Non-standard employment refers to any type of employment arrangement that deviates from standard (i.e. traditional) employment.

Self-employment refers to workers who own and operate their own businesses.

To define federal and provincial labour standards such as minimum wage, hours of work and public holidays, employment in Canada is classified into three broad categories based on the type of contract and roles and responsibilities of the worker (see Box 1). These categories, referred to as “work arrangements,” include 1) standard (or traditional) employment, 2) non-standard employment and 3) self-employment (see Figure 1).

Workers typically fall into one of two types: employee or self-employed worker. An employee is “any person employed by an employer and includes a dependent contractor and a private constable, but does not include a person who performs management functions or is employed in a confidential capacity in matters relating to industrial relations” (Canada Labour Code, 2020). 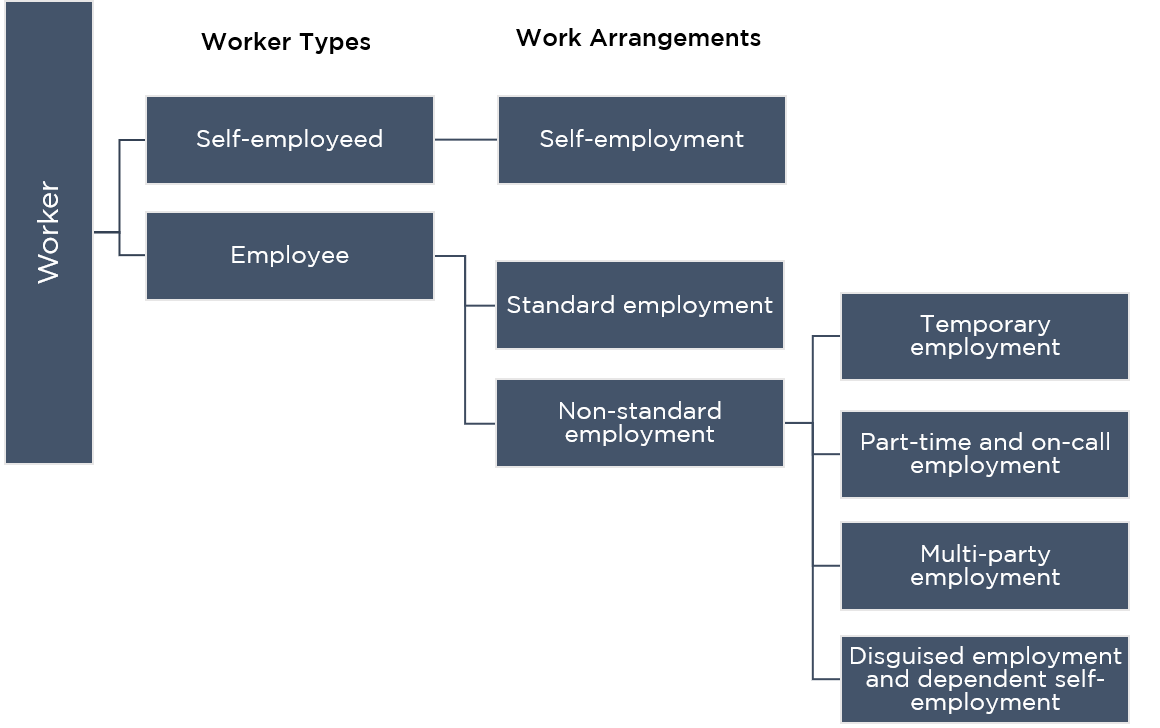 “Standard employment” refers to a work arrangement that is both full-time and permanent between one employer and one employee.

The term “non-standard employment” is often conflated with the labour market concepts of “precarity” (also known as “precarious work”) and “gig work.” Although the three concepts are often used interchangeably, they are distinct. As described above, non-standard employment refers to any arrangement that deviates from traditional employment.

Precarity is a more general concept concerning the wellbeing and/or fairness of one’s work arrangement. It is often thought of in terms of wages earned, benefits provided (or not provided) and other working conditions that cut across employment types (i.e., standard and non-standard employees could be engaged in either precarious or non-precarious work). See Box 2 for the definition of precarious work.

Because there is no universally agreed upon definition of gig work, the relationship between non-standard employment and gig work (and between precarity and gig work) is more complicated and they should be treated as distinct concepts. Future research will explore how best to consider “gig work” within this framework based on a review of international literature and best practices.

“Precarious work” (noun: “precarity”; adjective: “precariousness”) generally refers to work where the employee, rather than the employer, bears the risk of the job. While there is no official definition for precarious work in Canada, the International Labour Organization (ILO) defines precariousness by “risky” job attributes such as low pay (i.e., earnings at or below the poverty line), uncertain continuity of employment or high risk of job loss, little or no choice about working conditions (e.g., schedule or wages), and few to no job protections guaranteed by law or through collective agreements (e.g., lack of job benefits, and social, health and safety, and other protections typically associated with standard employment).

Every month, the Labour Force Survey collects data from approximately 53,000 households. It provides estimates on the labour force status, wages and demographic characteristics of the civilian non-institutional population 15 years of age and older. The LFS collects data on non-standard employment (NSE) and workers. It distinguishes between part-time and full-time workers, seasonal and non-seasonal workers (i.e., temporary), and those working for fewer than 30 hours per week.

Annually, the General Social Survey (GSS) gathers household data on social trends to monitor changes in the living conditions and well-being of Canadians over time, and to provide information on specific social policies. It is organized by theme (e.g., caregiving, families, time use, victimization, etc.), with each theme repeated every five years or so. Since 2014, survey results have been linked to tax files.

Two GSS surveys — cycles 4 and 9 collected in 1989 and 1994 — covered content related to education, work and retirement. These cycles contained questions like those in the LFS on the temporary nature of jobs. Part-time work and part-year work was defined as the main job typically lasting nine months or less per year. This theme, however, is not included in the current GSS.

The Survey of Labour and Income Dynamics (SLID) contains questions on labour market participation over time. It follows a panel of individuals over a six-year period, collecting detailed information on family structure, personal and family income, educational attainment, disability, immigration status and a wide range of other socioeconomic characteristics. It distinguishes among three groups of non-standard workers: 1) those self-employed (with and without paid help), 2) employees with permanent part-time jobs, and 3) temporary employees who work either full or part time. SLID was replaced by the Canadian Income Survey (CIS) in 2012.

The main objective of Statistics Canada’s cross-sectional Employment Insurance Coverage Survey (EICS) is to provides a picture of who does or does not have access to employment insurance benefits among the jobless and underemployed. EICS data tracks the number of workers in NSE prior to unemployment. The survey is administered to a sub-sample of LFS respondents four times a year in April–May, July–August, November–December and January–February. The target population for this survey is the unemployed and others who, given their recent status in the labour market, could potentially be eligible for employment insurance.

The Bank of Canada’s quarterly Canadian Survey of Consumer Expectations (CSCE) primarily measures household/consumer views of inflation, the labour market and household finances. Data is organized by age, geography, income and education. A key benefit of the CSCE is that one-off questions can be introduced to help deepen understanding of recent economic developments. In 2018, new questions identified workers who participate in informal “gig” work and their reasons for engaging in such jobs. CSCE data can be used to track informal work activities.

Statistics Canada’s annual Canadian Employer–Employee Dynamics Database (CEEDD) includes several linked longitudinal administrative data sets of employers and employees grouped by unique individual and business identifiers. The currently available data covers 2001 to 2017 and includes individual and business tax files such as T1 personal, family and business declaration files, the T2 files (corporate tax return and owner files), and T4 supplementary files. Tax files include all sources of income for both individuals and businesses and thus can be used to track both standard and non-standard employment.

Because CEEDD is linked to several administrative datasets, including the longitudinal immigration database (IMDB), it can be used to explore many issues including local labour market information trends such as hiring rates, separation rates, layoff rates, aggregate turnover rates, firm growth and dynamics, and labour productivity.

Statistics Canada’s cross-sectional Canadian Internet Use Survey (CIUS), conducted occasionally, collects information about the impact of digital technologies on the lives of Canadians. Data relates to online work, the use of online government services, social networking websites or apps, smartphones, digital skills, e-commerce, and security, privacy and trust. CIUS data can be used to observe a subset of NSE related to online work (i.e., gig work).

In 2005, the CIUS replaced its predecessor the Household Internet Use Survey (HIUS), first conducted in 1997 to measure household Internet penetration in Canada. The most recent 2018 estimates were published in October 2019; the prior survey was conducted in 2012. The 2018 questionnaire was redesigned to include questions about a wide range of activities including online work. Respondents were asked if they used the Internet or peer-to-peer apps to earn income and if it was their primary source of income.

Statistics Canada’s Survey of Work Arrangements (SWA) supplemented the LFS in 1991 and 1995, collecting information on work schedules, hours of work, flexible hours, home-based work, and employee benefits and wages. It identified those who worked different hours each day, job shared (i.e., worked fewer than 30 hours per week due to sharing the job with someone else), the number of hours worked from home, whether the job was permanent, if they were covered by union contract or collective agreement, and whether they were entitled to various benefits.

All these different sources of data can be accessed through the channels presented in Table 1.

According to Statistics Canada, information on standard and non-standard employment is used by a variety of stakeholders such as governments, policy makers, organizations, researchers and economists.

Federal, provincial/territorial, and municipal governments and policy makers use non-standard employment (NSE) information to inform data-driven policy development targeting these workers. It is also used to evaluate the performance of government programs and policies on the economic and social well-being of NSE workers.

Researchers and Other Labour Market Professionals

Researchers use NSE information to analyze economic and labour market trends. It can also be used to identify the sociodemographic characteristics, occupations, industry, geography and immigration status of NSE workers.

For any questions or comments, contact us and we'll get back to you as soon as possible