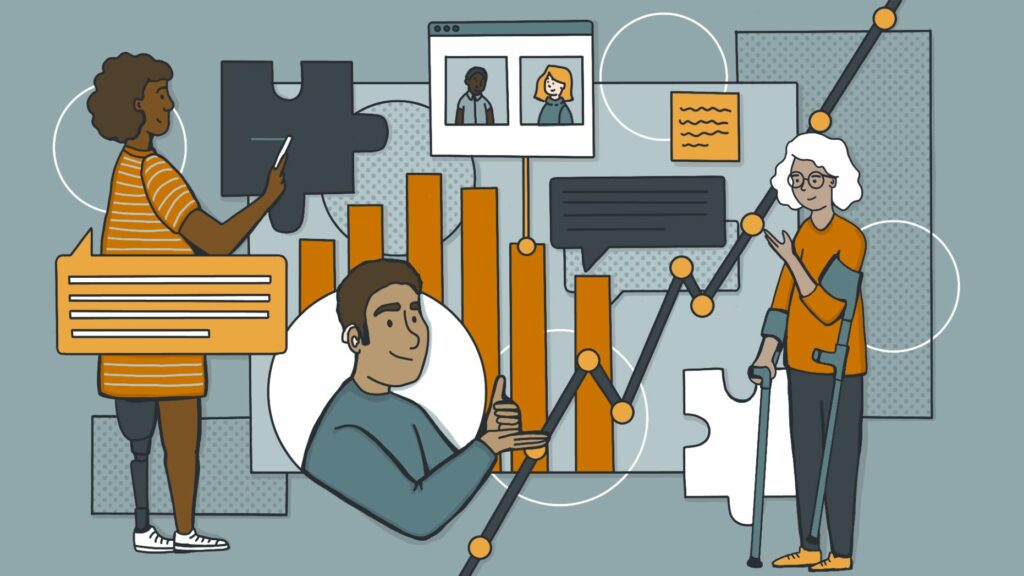 Listen to this report as an audio recording

This week marks the 29th annual International Day of Persons with Disabilities, a day dedicated, in part, to celebrating the important contributions Canadians with disabilities make in our communities and workplaces.

This year’s theme is Transformative solutions for inclusive development: the role of innovation in fuelling an accessible and equitable world. It offers a unique opportunity to highlight the many and varied contributions of workers with disabilities. It is also an opportunity to reflect on the labour force challenges that Canadians with disabilities face.

So, what can data tell us about the labour market situation for people with disabilities in Canada?

A snapshot of disability in Canada

In 2017, 22% of the Canadian population aged 15 or older (about 6.2 million individuals) had one or more physical, sensory, cognitive or mental health–related disabilities.

Employment and persons with disabilities

In 2010, Canada ratified the UN Convention on the Rights of Persons with Disabilities, which means that employment — and the opportunity to find work in an inclusive, accessible environment — is officially a right for people with disabilities.

Evidence of Canada’s progress towards this, however, is limited. Official data on the employment outcomes of persons with disabilities is available through one source, the Canadian Survey on Disability (CSD), which is only released once every five years.

There is a strong relationship between severity of disability and labour market outcomes. The CSD uses disability screening questions to create a global severity score (a number between 0 and 2) used to represent the intensity and frequency of difficulties and activity limitations experienced by people with disabilities.

Even when Canadians with disabilities are employed, they are more likely than those not living with a disability to work part-time (less than 30 hours per week).

Men aged 25–64 with more severe disabilities were more than three times more likely to work part-time (25%) in 2017 than men without disabilities (8%).

Women aged 25–64 with more severe disabilities were 1.5 times more likely (29%) than women without disabilities (19%) to be part-time workers.

Although we have some information on the employment outcomes for persons with disabilities, its scope is quite limited.

There’s a lot we don’t know when it comes to Canada-specific labour market information (LMI) on the employment outcomes, job opportunities and skills gaps for people with disabilities. Much of what we don’t know is due to the limited data.

In fact, there is only one source of data: the CSD. The CSD is a nationally representative survey that occurs once every five years, following the census of the population. The CSD collects information about the lived experiences of Canadians aged 15 years and older whose everyday activities may be limited due to disability or health.

Although the CSD is a valuable source of information, it has many limitations.

First, there is an issue of representativeness. The survey excludes those living in institutions and other collective dwellings, including people living on First Nations reserves and Canadian Armed Forces bases.

Second, changes to the CSD — including changes made to questions, content, wording and formatting — mean that it is often not possible to compare trends over time and between versions of the CSD.

Moreover, the CSD is not frequent or timely. As noted earlier, it is collected only once every five years, following the Census. As the only data source that provides statistics on people with disabilities in Canada, this infrequency means that available data are often out of date, failing to capture needs and trends as they emerge.

There is also a substantial time lag between the actual survey and data availability. For example, while the 2017 CSD captured data between March 1 and August 31, 2017, data were not released until November 8, 2019. This means that by the time CSD results are released, they are already out of date.

The way forward: Bridging the gap

High-quality data is essential to understanding the impact of disability on employment.

Beginning in early 2022, Statistics Canada started making inroads in collecting and disseminating disability-related employment information with a supplement to the Labour Force Survey (LFS), which will be released on an annual basis. These new LFS data will be used to complement the 2022 CSD and will aid in developing a more nuanced, in-depth understanding of the labour market experiences of people with disabilities.

These changes to the LFS could help bridge this data gap, inform policy priorities, create employment opportunities, build capacity and enhance accessibility. As well, the design and implementation of an ongoing, consistent, representative survey that asks questions specifically geared to understanding Canada’s employment disability gap will provide a much-needed source of LMI.

Dr. Suzanne Spiteri is a sociologist with several years of experience in both qualitative and mixed-methods data analysis. She leads labour-related projects that explore labour market tightness and the labour market outcomes of under-represented groups.