Two years after the onset of the COVID-19 pandemic, we explore how women in Canada are recovering in a tumultuous labour market.

Illustration by Dorothy Leung for LMIC.

Listen to this report as an audio recording

Women’s employment recovery has been strongest among women aged 25–54 (“core-aged”). By February 2022, the share of core-aged women with a job reached the highest level ever recorded (81%), primarily driven by gains in full-time employment.

The employment gains for core-aged women are concentrated in middle- and high-earning occupations, which have increased by more than 4% since 2020’s lows. Employment for women is up slightly in lower paying occupations, 0.5% above pre-pandemic levels.

Full-time employment for younger (15–24 years) and older (55+ years) women and men has yet to fully recover, remaining below pre-COVID levels.

Exploring unrealized employment growth: what if there had been no pandemic?

Women recovering in information, culture and recreation occupations, but still over-represented in other hard-hit sectors

Women in low-earning occupations have had the slowest recovery

One year ago – a full year into the global COVID-19 pandemic – we explored how, as a result of COVID-19, more women had lost jobs than men.

Now, two years after the start of the pandemic, we’re revisiting the topic. How has the labour market changed for women in Canada? We explore how women have fared by employment type, age, sector, and income group.

Recovery for women has been strongest among the core-aged population (aged 25–54) who are now reporting the highest-ever labour force participation and employment rates. However, we have seen uneven recovery across a number of other dimensions, which we investigate further below.

Exploring unrealized employment growth: What if there had been no pandemic?

Employment rates for both men and women during the pandemic were at their lowest in April 2020, and recovery over the subsequent two years has been rapid but unsteady.

Although employment has returned to and now surpasses its February 2020 level, Canada’s labour markets remain well below where we might have been if COVID-19 had not occurred.

To illustrate this, Figure 1 includes dashed lines showing what employment trends might have been had a global pandemic not caused business restrictions and halted the inflow of the working-age immigrants Canada’s labour force relies on for growth.

If male and female employment had continued along the average trajectory from 2005 up to February 2020, total employment would have been almost 1% higher than its current level.

One takeaway from this analysis is that when we use February 2020 employment levels as a benchmark for comparison, recovery appears significant. When viewed alongside unrealized projected growth in employment, recovery is slightly weaker; even against this metric the recovery in total employment is near complete.

However, Canada has experienced slow population growth over the past two years. This is an important additional dimension to consider when evaluating how the pandemic has impacted Canada’s labour market.

Figure 1: Employment has recovered but is below its pre-COVID projected level

Actual and projected employment for men and women, from 2005 to 2022

Over the past two years, the Canadian population has continued to grow – although at a slower rate than average due, in part, to immigration being stalled for much of 2020 and 2021.

Despite these immigration restrictions, the population aged 15 years and older increased by 2.1% between February 2020 and February 2022, according to the Labour Force Survey — +0.2 percentage points faster than the growth in employment (1.9%).

Given the similar net growth in population and employment over the past two years, Canada’s employment rate — the share of those aged 15 and over who are working — is now at 61.8%, essentially the same as the pre-pandemic employment rate (61.9%).

This is a key labour market metric that reflects strong overall jobs recovery.

Focusing on the core-aged group, the total population of this age group increased by only 1.3% over the past two years — slower than the overall population increase of 2.1%. The effect of Canada’s ageing population is evident from this slower growth. A larger number of older workers aged out of the core-aged demographic and were not replaced by newcomers to Canada, who are typically core-age workers.

On the employment side, the core-aged workforce returned to employment much more quickly than younger or older workers. Over the past two years, core-age employment has increased by 3.0%. Thus, unlike the overall picture, employment has greatly outpaced population growth for those aged 25–54.

As a result, the employment rate for the core-aged workforce has climbed to unprecedented highs for women and has reached the highest level in three decades for men.

Core-aged men’s employment recovery through 2021 has also been impressive, but it follows a rather different historical track. Over the past 45 years, the core-aged employment rate has trended downward, failing to fully recover after each recession (grey bars in Figure 2).

COVID-19 recovery, in this sense, is proving better for core-aged men: their employment rate has reached 88.2%, the highest since 1989. Thus, while core-aged men’s employment does not match 1970s levels, it is historically high — indicating a very strong recovery from the April 2020 low point.

Women have long been over-represented in the part-time workforce (part-time employment is defined as less than 30 hours per week).

Prior to the pandemic, women represented nearly two-thirds (65%) of part-time workers versus 43% of full-time workers.

Conversely, as shown in Figure 3, employment gains in full-time work are observed only for core-aged men and women. In the remaining age groups, men’s employment recovery lags slightly their female counterparts.

Figure 3: Full-time employment for women is down, except for core-aged women 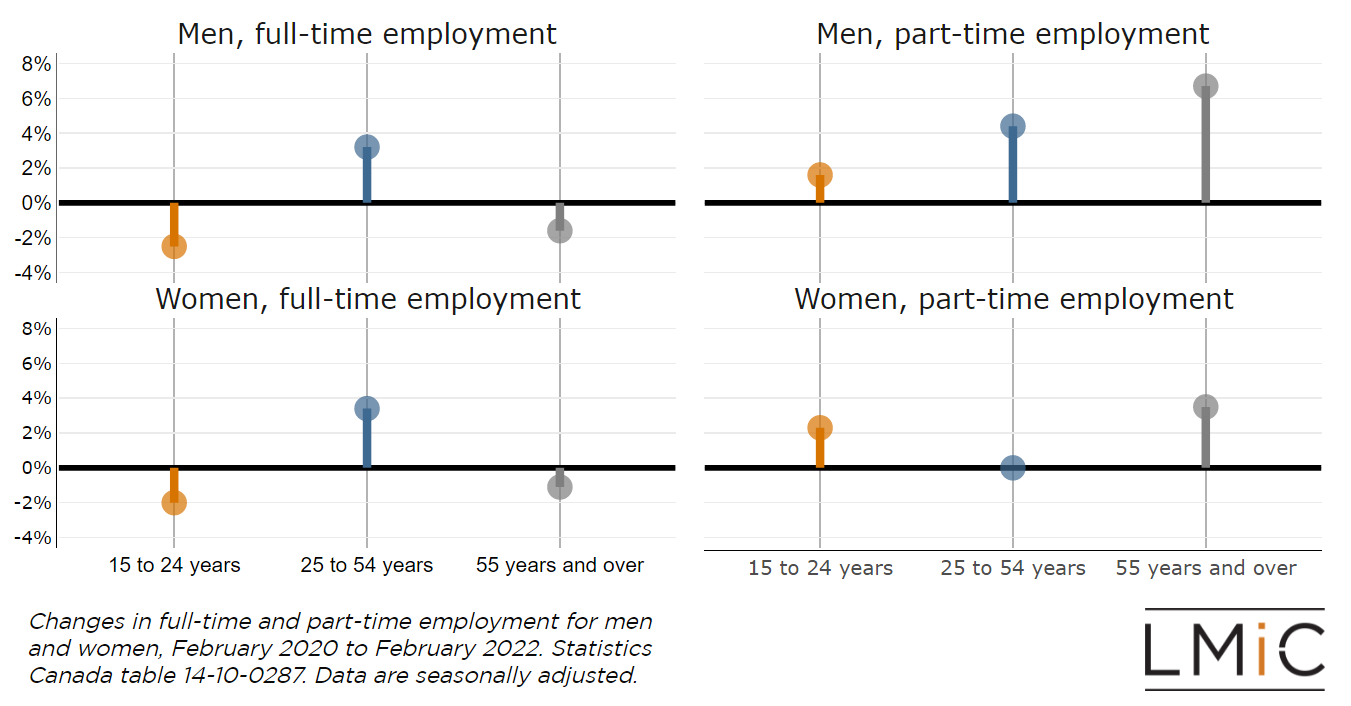 Note that it is possible that the slower recovery in part-time employment among core-aged women compared to their male counterparts, coupled with a rise in women’s full-time employment since February 2020, indicates that an increasing share of woman may be working full-time.

However, we cannot be certain that the women who were working part-time prior to the pandemic are the same women who have taken up full-time employment. Data from the Labour Force Survey are cross-sectional (answered by different individuals over time), which means that all we can conclude is that the lagging recovery in part-time employment for women reflects the hard-hit, customer-facing sectors of the economy in which part-time work is more common than in other sectors.

Women recovering in information, culture and recreation occupations, but still over-represented in other hard-hit sectors

Our previous report from one year ago found that women were over-represented in the hardest hit sectors and, within those sectors, women were more likely to lose their jobs.

Figure 4 shows job losses between February 2020 and April 2020 (yellow) in the five hardest hit sectors alongside subsequent job gains up to February 2022 (blue), for women and men. Aggregate changes in employment across all other sectors is also included.

Figure 4: Employment remains low for men and women in the accommodation and food service sector 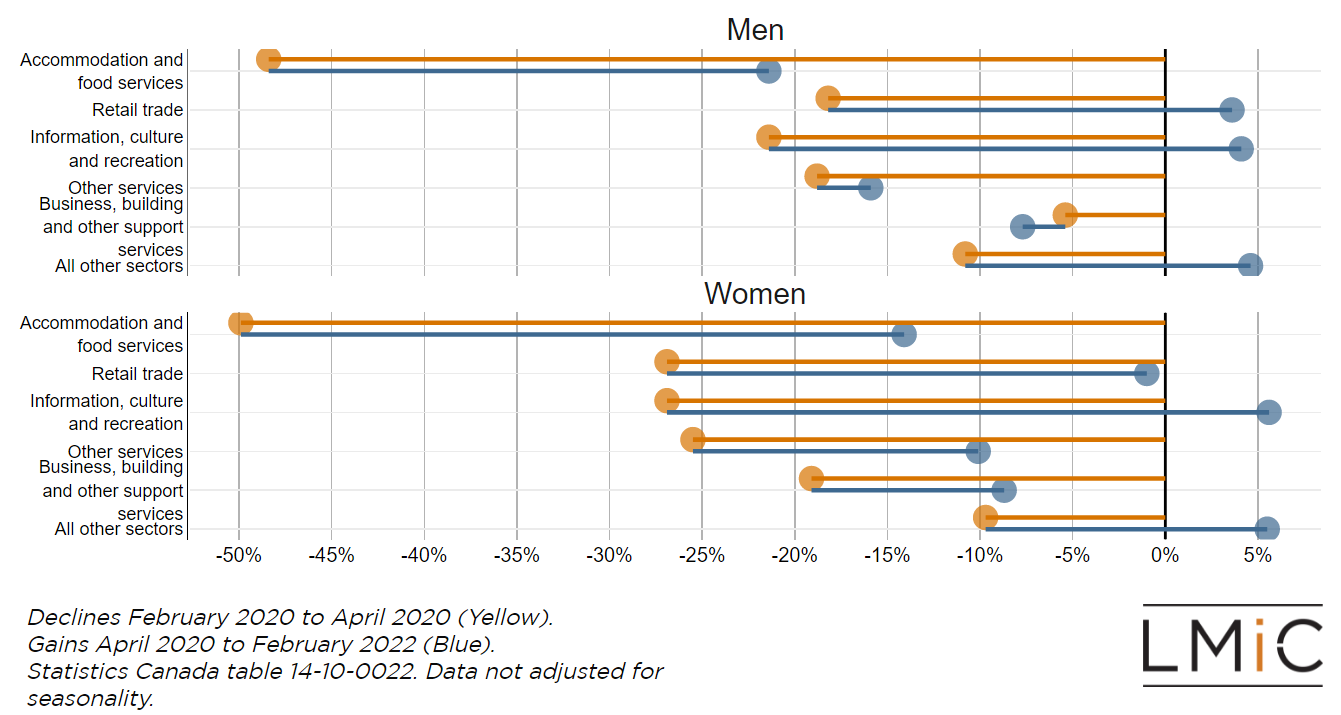 Women in low-earning occupations have had the slowest recovery

Figure 5: Employment for core-aged women in low-income occupations is up slightly, 0.5% above pre-pandemic levels 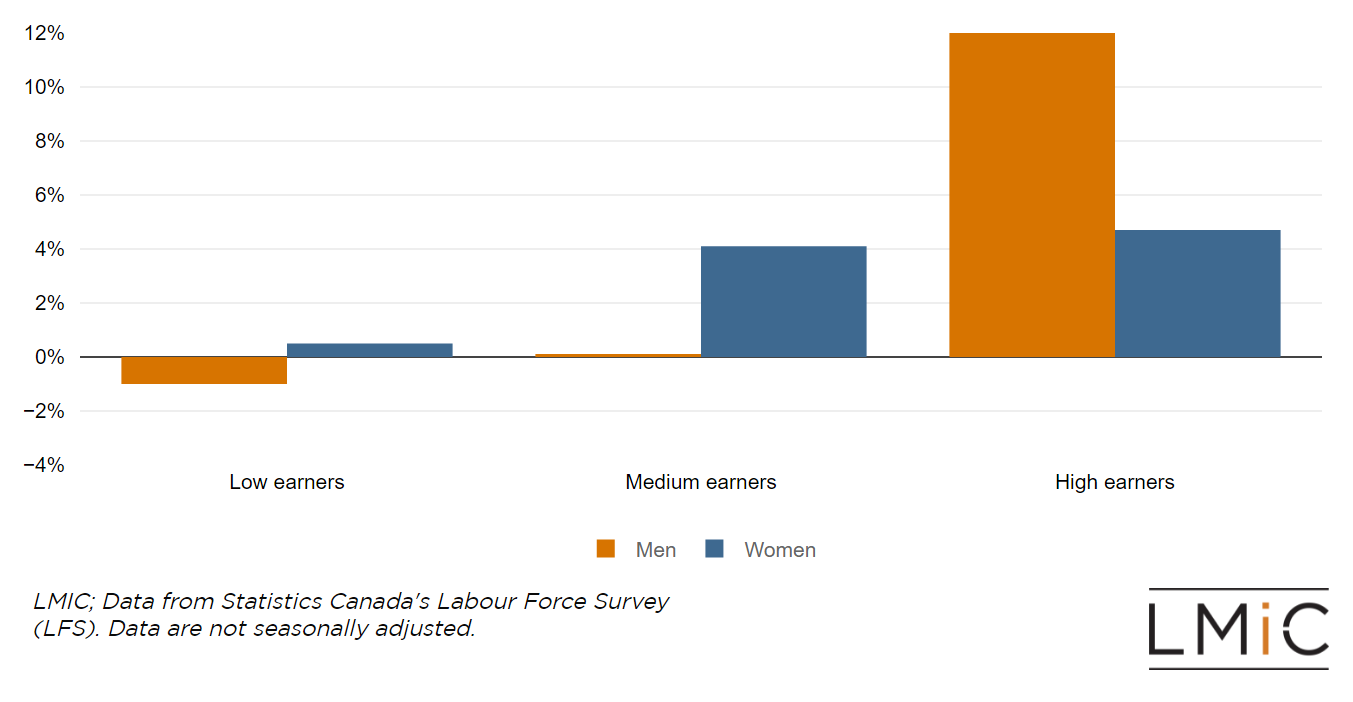 At the outset of the pandemic, the labour force participation rate of women aged 25–54 dropped significantly, with larger declines among women with primary-school-aged children.

Since April 2020, the recovery in women’s labour force participation – as with the employment rate shown in Figure 2 – has been rapid.

Remarkably, despite the many challenges parents faced finding childcare and education services during the height of the pandemic, mothers have returned to the workforce in droves.

Figure 6: Labour force participation rate dropped significantly for core-aged women in the spring of 2020, but surpassed the pre-pandemic levels in February 2022 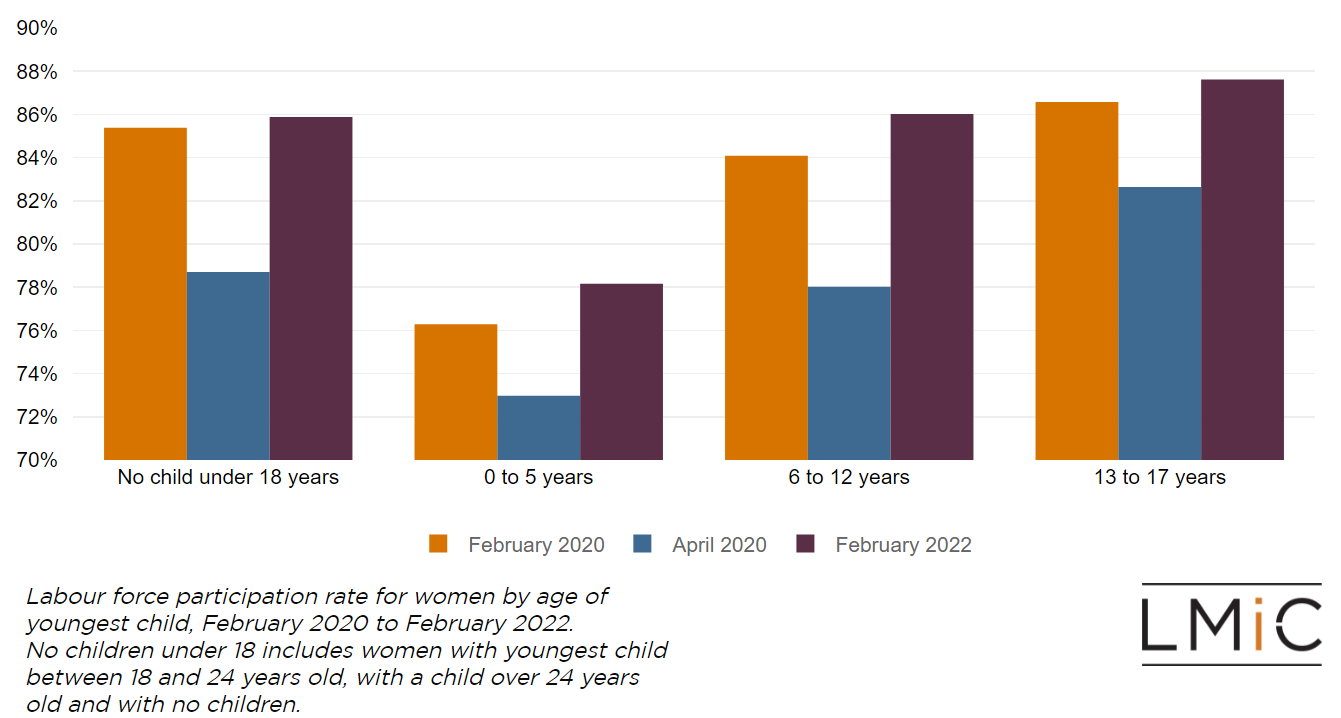 Since experiencing the initial, unprecedented loss in employment in the spring of 2020, Canadian labour markets have shown resilience both in terms of the overall recovery and in sustaining smaller disruptions through each subsequent wave of COVID-19 and the attendant public health measures put in place. Two years on, employment recovery has been stronger for both women and men.

Last year, in the spring of 2021, our report highlighted the struggles faced by women in returning to employment. Now, as we enter the spring of 2022, women’s employment has fully recovered to pre-pandemic levels, with job recovery among women aged 25–54 being a notable bright spot — they are now employed in greater numbers (relative to the population) than ever before.

However, full-time employment for younger (15–24 years) and older (55+ years) women remains below pre-COVID levels, and employment for part-time core-aged women has only just recovered to February 2020 levels.

These figures may raise longer-term issues if today’s youth, specifically female youth, miss the opportunity to gain work experience and develop the skills they will need for later career development.

The latest figures reported here are for February 2022, which reflect the loosening of many public health measures introduced in January 2022.

While there remains the possibility that future variants might cause additional labour market disruptions, the successful roll out of vaccines through 2021 and the adaption of many work practices is building our collective resilience to the COVID-19 virus. We will continue to track the labour market recovery for women, men and other groups of Canadians, but as of March 2022 the outlook is a positive and hopeful one.

This LMI Insight Report was prepared by Brittany Feor and Behnoush Amery of LMIC with the support of Anthony Mantione and Liz Betsis.

It’s International Women’s Day. What do we know about the state of women’s employment in Canada?