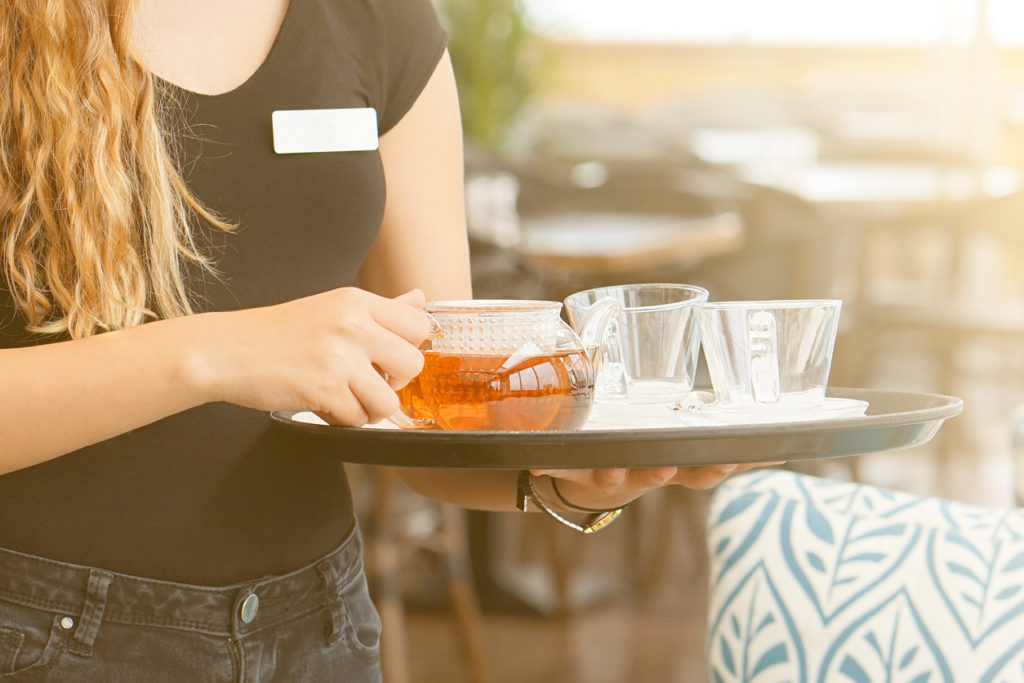 The COVID-19 shutdown has resulted in massive job losses, hitting some sectors worse than others and resulting in widespread upheaval. Women workers, however, have been affected to such an extent that some economists are calling this the first “she-cession.” Between February and May 2020, women bore 57% of employment losses, and experienced higher rates of job losses than men across all education levels. We also know that part-time workers have been disproportionately displaced. Considering these two dimensions together, women working part-time account for one-third of the total job losses – despite representing only 13% of employment prior to the crisis.

Figure 1 shows the share of employment losses over the past four months for women and men working full-time and part-time compared to their shares of employment prior to COVID-19. If job losses were proportionate, these two distributions would be roughly the same. But clearly, the distribution of job losses has been uneven. Women in part-time jobs made up 13% of employment in February, but have since accounted for 33% of all job losses. Similarly, part-time male workers have been overrepresented among job losses, as they were 7% of the workforce but 17% of job losses.

Figure 1. Part-timers, Especially Women, Are Overrepresented in COVID-19 Job Losses.
Pre-crisis employment share (February) versus share of job losses (between February to May 2020) 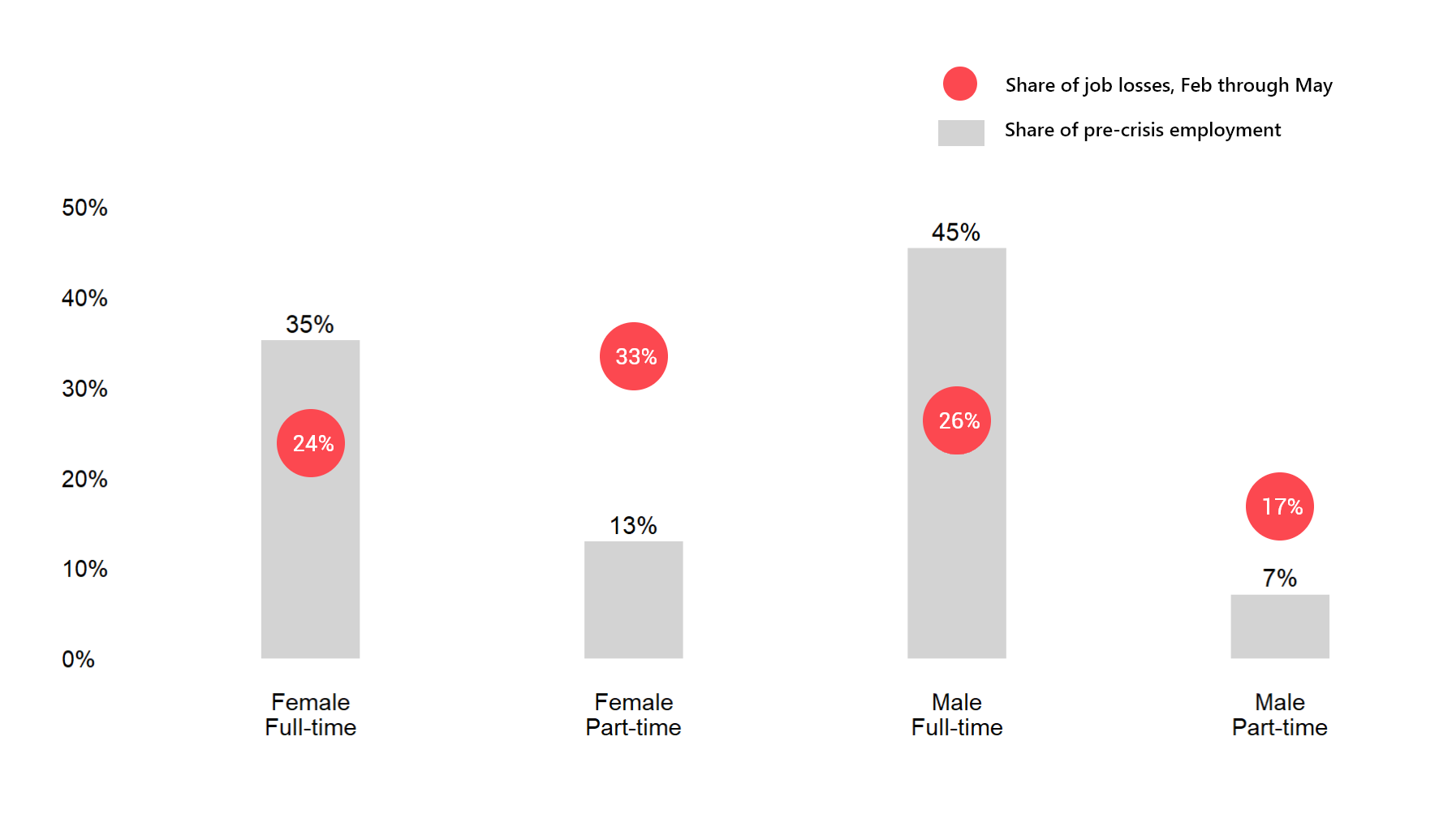 Of all occupational categories, the female-dominated “sales and services occupations” (NOC 6) have been hit hardest over the past few months in terms of job losses, especially among low-income earners. The number of jobs in this sector fell from 1.1 million in February to 630,000 in May, a decline of 43%. Figure 2 shows the shares of job losses and employment shares in sales and services occupations. The same pattern of women workers being more affected is even greater in this sector. Female part-time workers accounted for four out of every 10 jobs lost (39%) in this sector despite having held only two of 10 jobs (24% employment share). While male part-timers are also overrepresented among job losses in this sector, they account for only half of the their female counterpart’s job losses (21%), albeit having represented a smaller share of employment before the pandemic (14%).

Figure 2. Female Part-Timers Are Overrepresented in COVID-19 Job Losses in the Most Affected Occupational Category
Pre-crisis employment share (February) versus share of job losses (between February to May 2020) in sales and services occupations 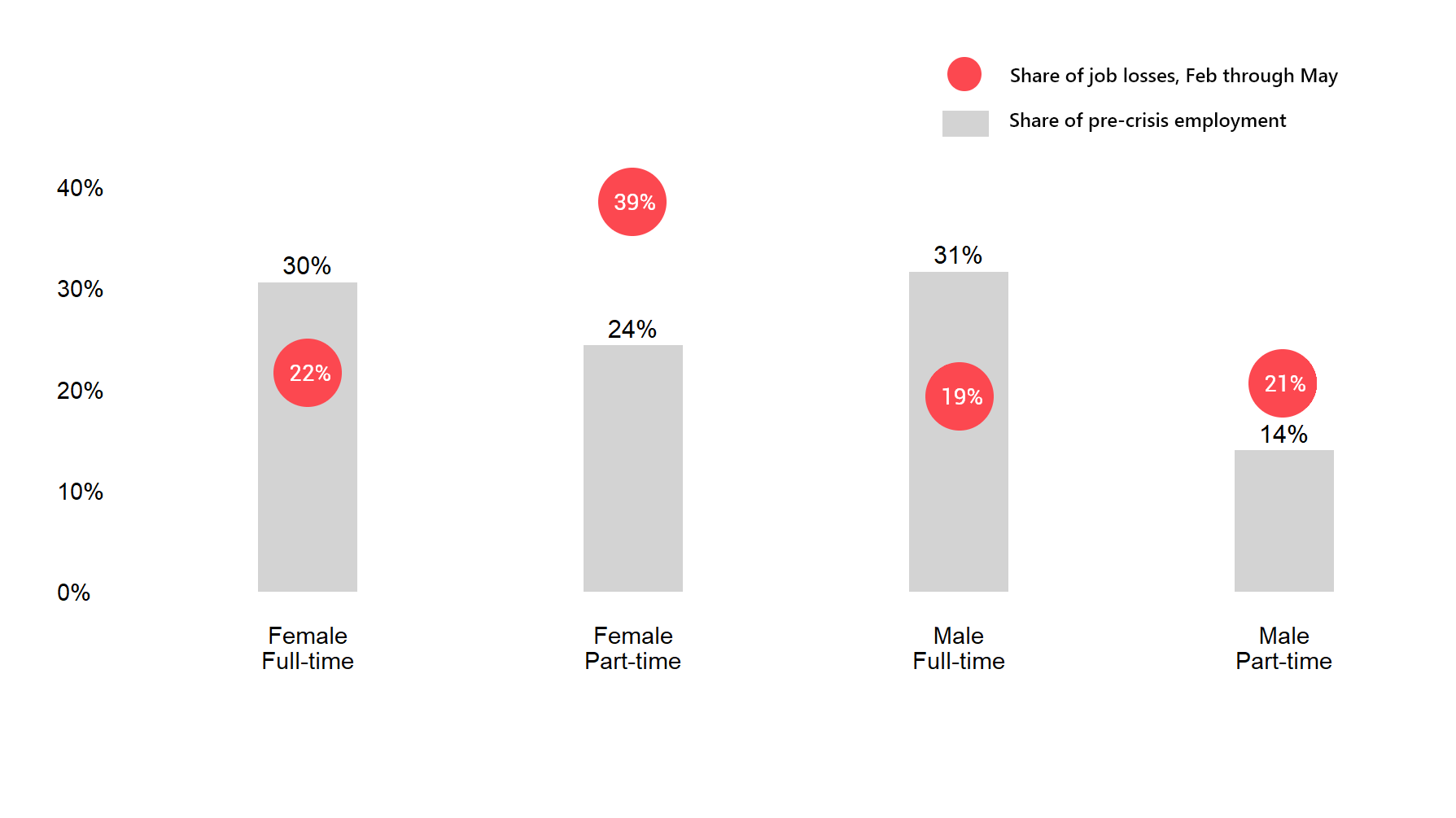 What About the Future?

Job losses for both women and men part-time workers have fallen much more steeply than their share of pre-crisis employment. For many, part-time work provides an important income source as well as much needed flexibility, especially for those with family responsibilities such as taking care of children or elderly parents. As the effects of COVID-19 continue to unfold, we must make every effort to better understand who is being affected by job losses so we can better target our recovery efforts.